These aromatic, chewy rings are truly everything you’ve ever wanted from a bagel. #61: Everything Bagels

First off, I now realize how spoiled I have been with my fancy camera. It went on a trip to Bryce Canyon and Zion without me this weekend so I had to make do with my phone camera. While they’re not bad, the pictures lack the detail that my DSLR camera brings out.

See, there it is! And it’s trusty steed, Nate.

Anyway, let’s talk bagels! I made tye-dye bagels in week 32 and it was an adventure with food dye. One of the basics that I walked away with is that boiling the raw dough before baking helps to create the texture and sheen that you want in a bagel. When the dough is dropped into the boiling water, the starches on the surface of the dough react to form a barrier. This helps keep the bagel from rising too much in the oven, maintaining the classic dense texture.

Instead of just plain water, the recipe suggested adding a few scoops of honey. I’m not sure that there was a noticeable difference in coloring or flavor, but technically it’s supposed to lend a subtle sweetness and a caramelized color to the bagel. They turned out a lovely caramel color, but I think that was more a result of the light egg wash I painted on to help the sprinkle of seasoning stick. If they weren’t coated in delicious onion-y, garlicky seeds, you could probably taste slightly-sweet notes!

Have you seen this at Trader Joe’s? It called my name as I walked by it’s shelf, saying “buy me! make delicious bagels with me!” I couldn’t resist. If there isn’t a Trader Joe’s near you, or you don’t feel like ordering a pre-made mix online, it’s super easy to make. Just mix onion flakes, garlic salt, black and white sesame seeds (or whatever savory seasonings float your boat.)

Every time I make bread, I remember that dough hooks are a lovely invention. Ain’t nobody got time to knead bagel dough by hand. Though I have to say, it can be very therapeutic if you’re having a bad day to knead it sans-machine.

It only took about 10-15 minutes to whip up the dough, and then it had to rise for about an hour and a half. It’s very handy if you have a busy morning – just throw it together when you first wake up, go off and be productive, then come back and shape, boil and bake! 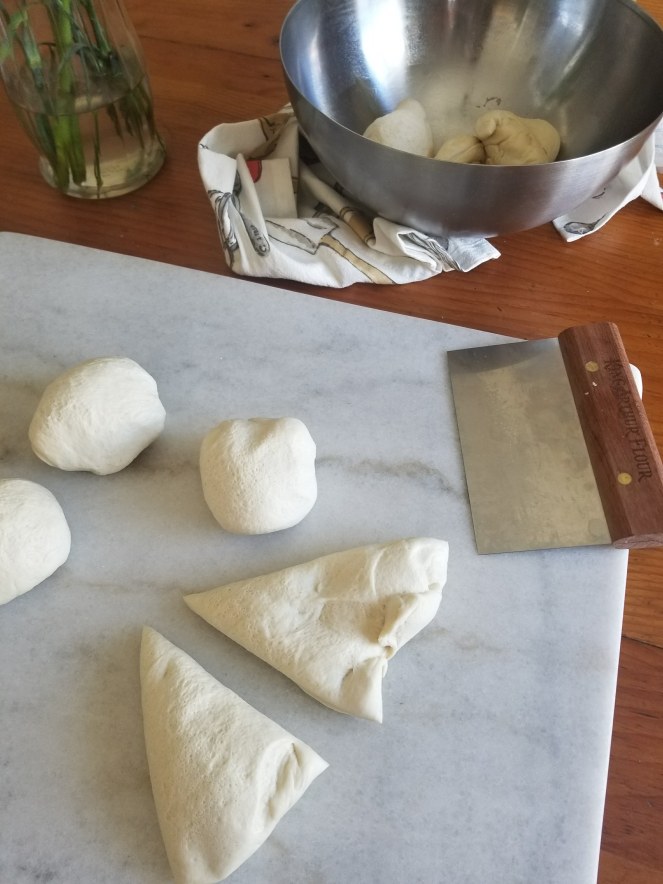 Next, I split the dough into eighths and rolled them into balls. When poking through the hole for the center of the bagel, I made sure to stretch the larger than I wanted (the gluten causes the hole to shrink back when you’re not looking.)

My bagels had a little character, instead of being perfectly smooth and round. Having an unbroken surface helps to create the yummy blistered, crunchy surface of some store-bought bagels. Still yummy with character too, though.

Boiling station all ready to go with a damp towel over the raw bagel rings. 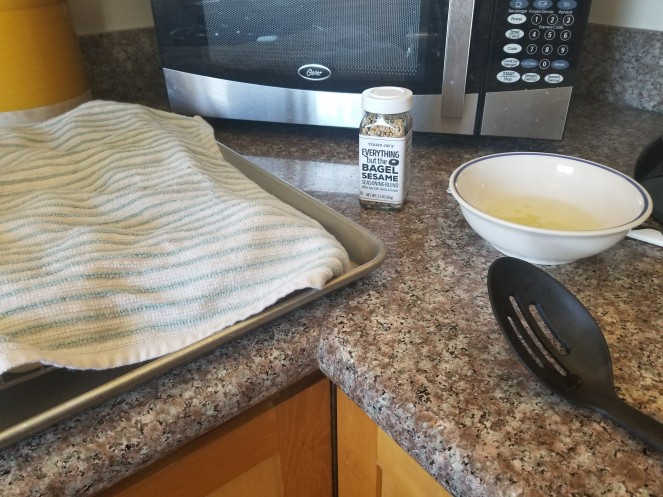 Also had to have my egg wash and toppings ready to go, for when the bagels were transferred from the hottub into the sauna. This was the part of the recipe where prep work proved it’s worth.

I was a tiny bit worried that I wouldn’t be able to tell when they were done because of the premature browning that can happen with eggwashes, but they turned out really well! I decided to believe in the recipe and it paid off. More proof that worrying in baking is a waste of time. It shall be whatever it shall be. Either take the bagel out or leave it in for longer. Own that decision! May you now feel empowered for your next daunting bread bake. 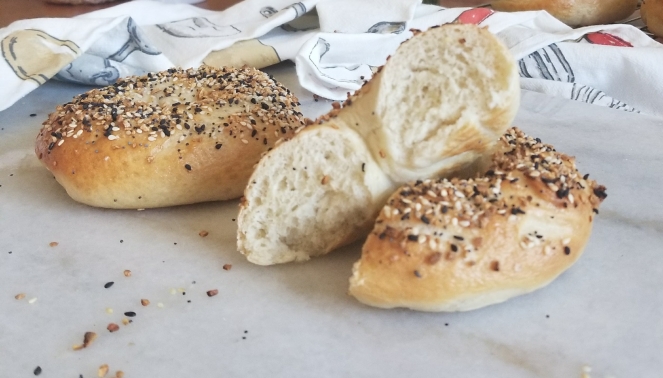 Go forth and pile on the cream cheese. Happy munching!

One thought on “Everything Bagels”