The best way to beat this chilly rainy weather is a big mug of hot cocoa with a homemade marshmallow! #60: Vanilla Swirl Marshmallows

How have you been pronouncing ‘marshmallow’? I’ve always said ‘mellow.’ Up until this week, I actually thought it was spelled with an ‘e’! I blame the fact that ‘marshmallow’ is not a word that is commonly written out on paper.

The history of the name seemed so overly simple, that I looked up three other reference points to make sure it wasn’t a joke. The original marshmallow was made from the sticky sap of the mallow plant, which thrives in marsh areas. Marsh-mallow, there you go! *in the voice of Gus from My Big Fat Greek Wedding*

The history behind the candy dates back to ancient Egypt, where the mallow sap was mixed with nuts and fruit, but it didn’t start to resemble it’s current cloud-like form until the French got their hands on it. French candy-makers whipped the sap and molded it into shapes, and then in the 1900s, gelatin was introduced to make it the marshmallow we know today. If you want more fun facts, check out this marshmallow history page – who knew there was a National Confectioners Association? What a wonderful thing. 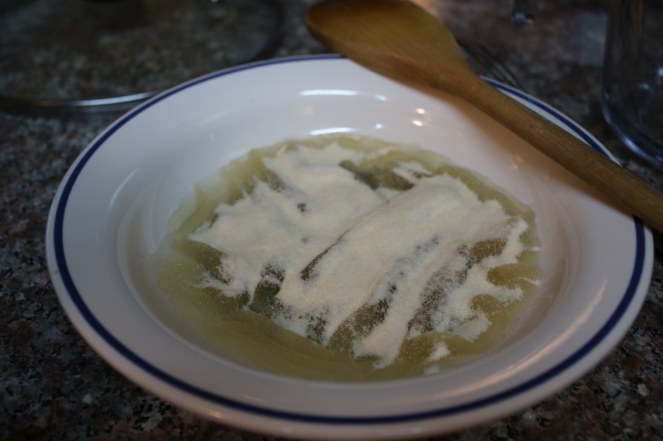 First step: soften the gelatin. Gelatin has not been my friend, historically (lookin at you, Week 7 raspberry charlotte.) But it’s time to leave our disagreements behind and work together.

Pour some sugar on me..

The next few steps required a little bit of coordination and more focus than I normally allot for a weeknight. When the sugar mixture reached 230 F, I started whipping the egg whites so they would be nice and fluffy by the time the hot ingredients were added. When it reached 246 F, I snatched it off the heat and mixed in the gelatin until dissolved. That then was poured in to the whipping egg whites (gently! no one wants to be splatted with boiling sugar syrup) to make a glossy meringue.

Ooo so glossy. I beat it until the bowl was slightly warm to the touch. The recipe called for the bowl to room temperature before stopping, but the consistency was fine at lukewarm.

Quickly spreading it around before it stops wanting to move. I mixed a few drops of food gel into the small scoop of meringue that I hadn’t added to the pan, then dolloped it on top and swirled to my heart’s content.

Did I mention this is a no-bake recipe? It’s very chill (literally – you just chill it in it’s cornstarch-coated pan for 6 hours or so until it is firm.) It’s like a rectangular cloud! 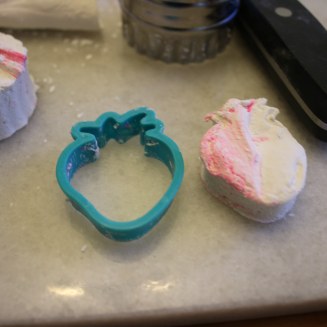 Once it’s fully chilled, grab some cookie cutters and let your creativity run away with you! I also sliced some neat little squares – they look cute either way. Definitely oil your knife or cookie cutter before using so you don’t end up with a sticky mess.

Recipe from: the Miette cookbook by Meg Ray! You can find copies of it online easily. 🙂