Happy 4th of July week! Decided to get my red, white and blue on for this week’s bake. Week 27: Mixed Berry Pavlova

See the pop-its in the background? So festive. I don’t know about you, but pop-its and sparklers are tied for my favorite 4th of July thing. Especially since I learned to snap the poppers between my fingers! If you haven’t tried it, I highly recommend it.

So I had actually never heard of a pavlova before! I immediately thought of Pavlov’s dogs when I heard the name for the first time. Psychology major problems. It’s actually a possibility that I’m developing some sort of Pavlov effect in regards to my kitchen timer. When it goes off, that means yummy things are about to emerge from the oven. Mmm.

This recipe was so light and fluffy – perfect for dessert on a hot day! A layer of meringue, clouds of whipped cream and luscious berries. The only downside is that it doesn’t last very well, since the meringue starts to absorb the moisture from the whipped cream. All the more reason to use it as an excuse for a dinner party or BBQ. It’s definitely center-piece material!

All of my pictures turned out especially dark this week – ah well! I’ll just have to describe them super well for yall. This is the beginning of the meringue. The egg whites are considering getting fluffy, but haven’t quite decided yet. The whisk attachment on my stand mixer helped them make their decision faster. 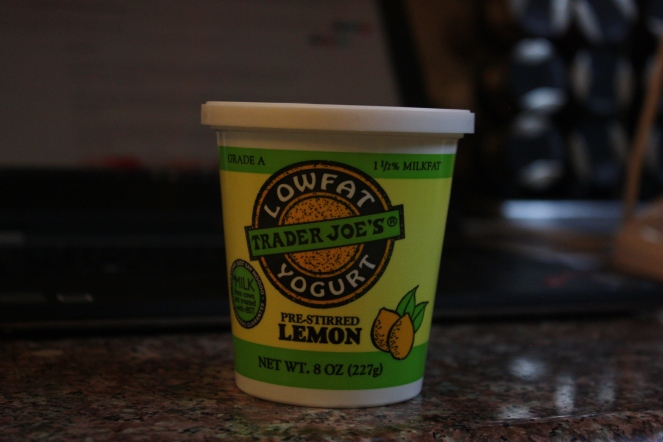 You’re probably wondering, how does lemon yogurt come into this recipe?? It doesn’t. Ha! Tricked ya. I had to borrow a tablespoon or two of white vinegar since I didn’t fancy buying a whole bottle of it just for a teaspoon, and this was the smallest container I could find. This brings me to the oddest ingredient of the recipe: a small amount of white vinegar. Apparently, it helps with the stability of the meringue. The acid in the vinegar helps to denature the proteins in the egg white, so they become long and join together to protect the air bubbles from the addition of heavy items like sugar. Still don’t feel like I have a great grasp of the science behind it though. If any of you know more, shoot me an email!

A lovely, glossy bowl of meringue, just begging to be shaped and baked. 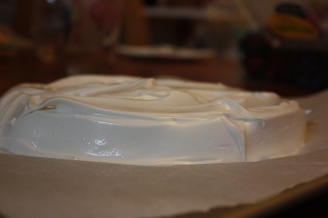 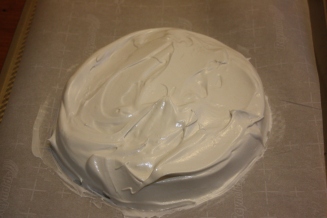 Ta-daa! The base of the pavlova is now shaped. The joy of meringues is that they don’ grow or spread in the oven. The just dry out! So it’s important that you initially shape it the way you want it to be at the end of the bake.

Just a few tiny cracks after transferring it to a platform from the pan. Not too shabby.

Time for some whipped cream. Vanilla and sugar to jazz it up! I also threw in a teaspoon or so of maple syrup just to see what would happen. It wasn’t quite enough to make a huge flavor difference, but next time I’ll try adding more.

Had to track down all the red and blue fruit options at the market. Came up with: blueberries, cherries, strawberries and raspberries.

Here it is! Fruit piled artfully (or not so much) on top of the cream on top of a meringue with a crispy exterior and a soft, chewy inside. Make one. Do it. You know you want to. 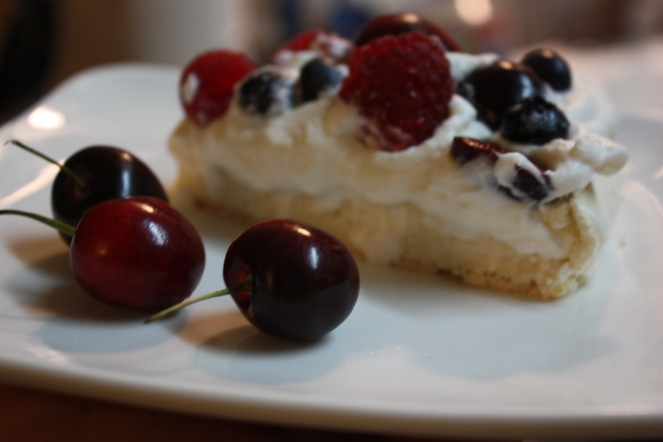 It’s like an easier pie without the pesky pie crust that can be so temperamental. Next time, I want to try piping the meringue base in swirls or some other pretty formation. Happy munching!

One thought on “Mixed Berry Pavlova”